[trying to clarify the architectural geography]

Abbey street would have been the prestige address, so the public would have been met there for subscriptions and ads, etc.  But the FJ had an equivalent front counter on the Prince's side because LB lifts the counterflap.

The heavy presses should be on the ground floor, between, closed off to reduce noise.  The editor and publisher seem to be upstairs, different editors for FJ and ET but the same publisher.


Ellmann, re 1909:  "During these last days in Dublin Joyce visited several times the offices of the Evening Telegraph, where the editor, Patrick J. Mead, introduced him to the staff. The Evening Telegraph, closely associated with the Freeman's Journal, was one of Dublin's old newspapers, dating back to 1763... The offices which the two papers shared were also old, and very big and rambling; they extended from Prince's Street to Middle Abbey Street. The editorial staff used the Abbey Street exit, and Joyce, who remembered these visits in the Aeolus episode of Ulysses, has the newspaper boys using the same exit, when in fact the despatch room was on the Prince's Street side. This transposition may have been inadvertent, but was more probably a deliberate decision to add to the Aeolian atmosphere of haste and confusion."

"History of the Sinn Fein movement and the Irish rebellion of 1916" by Francis P. Jones: "Some sixty yards below the corner of O'Connell Street in Middle Abbey Street were the offices of The Evening Telegraph, the afternoon edition of The Freeman's Journal. These offices extended right back to Prince's Street, where the front door was labeled with the name of The Freeman's Journal." 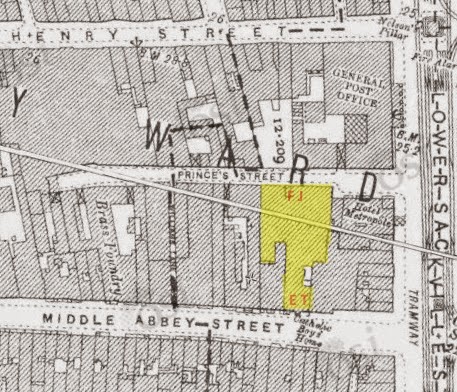 -- Just cut it out, will you? Mr Bloom said, and I'll take it round to the Telegraph office.

Mr Bloom turned and saw the liveried porter raise his lettered cap as a stately figure entered between the newsboards of the Weekly Freeman and National Press and the Freeman's Journal and National Press. Dullthudding Guinness's barrels. It passed stately up the staircase
[is this another of Ellmann's transpositions, with editorial staff(?) using the wrong entrance?]

The door of Ruttledge's office whispered: ee: cree. They always build one door opposite another for the wind to. Way in. Way out.

A telegram boy stepped in nimbly, threw an envelope on the counter and stepped off posthaste

A meek smile accompanied him as he lifted the counterflap, as he passed in through the sidedoor and along the warm dark stairs and passage, along the now reverberating boards.
[up or down? same stairs as Brayden?]

He pushed in the glass swingdoor and entered, stepping over strewn packing paper. Through a lane of clanking drums he made his way towards Nannetti's reading closet.
[glass to avoid collisions?]

The foreman, without answering, scribbled press on a corner of the sheet and made a sign to a typesetter. He handed the sheet silently over the dirty glass screen.

-- If you want to draw the cashier is just going to lunch, he said, pointing backward with his thumb.

Mr Bloom, glancing sideways up from the cross he had made, saw the foreman's sallow face, think he has a touch of jaundice, and beyond the obedient reels feeding in huge webs of paper.

A typesetter brought him a limp galleypage. He began to check it silently. Mr Bloom stood by, hearing the loud throbs of cranks, watching the silent typesetters at their cases.

The nethermost deck of the first machine jogged forward its flyboard with sllt the first batch of quirefolded papers.

That door too sllt creaking, asking to be shut.

He looked about him round his loud unanswering machines.

-- Monks, sir? a voice asked from the castingbox.

He walked on through the caseroom passing an old man, bowed, spectacled, aproned. Old Monks, the dayfather.

He stayed in his walk to watch a typesetter neatly distributing type.

Mr Bloom passed on out of the clanking noises through the gallery onto the landing.
[this is the 1st/only mention of a 'gallery']

He went down the house staircase. Who the deuce scrawled all over these walls with matches?

A sudden screech of laughter came from the Evening Telegraph office. Know who that is. What's up? Pop in a minute to phone.
[the social group is on the ET side]

-- Is the editor to be seen? J.J. O'Molloy asked, looking towards the inner door.
[FJ editor's 'inner' office is 'inner' door from ET office?]

-- Very much so, professor MacHugh said. To be seen and heard. He's in his sanctum with Lenehan.

J.J. O'Molloy strolled to the sloping desk and began to turn back the pink pages of the file.

The inner door was opened violently and a scarlet beaked face, crested by a comb of feathery hair, thrust itself in.

Mr Bloom, seeing the coast clear, made for the inner door.

-- Just a moment, Mr Crawford, he said. I just want to phone about an ad.

Lenehan came out of the inner office with Sport's tissues.

Screams of newsboys barefoot in the hall rushed near and the door was flung open.

Professor MacHugh strode across the room and seized the cringing urchin by the collar as the others scampered out of the hall and down the steps.
[ET side transposition, ET office is 2nd floor?]

-- Throw him out and shut the door, the editor said. There's a hurricane blowing.

He hustled the boy out and banged the door to.

The bell whirred again as he rang off. He came in quickly and bumped against Lenehan who was struggling up with the second tissue.

He went to the door and, holding it ajar, paused... The noise of two shrill voices, a mouthorgan, echoed in the bare hallway from the newsboys squatted on the doorsteps
[bare hallway is 2nd floor, music from 1st?]

The editor who, leaning against the mantelshelf

-- Back in no time, Mr Bloom said, hurrying out.
[he has to go down one flight?]

Both smiled over the crossblind at the file of capering newsboys
[looking down?]

They're gone round to the Oval for a drink.

The editor came from the inner office

Mr O'Madden Burke, tall in copious grey of Donegal tweed, came in from the hallway.
Posted by Tim Finnegan at 2:41 AM